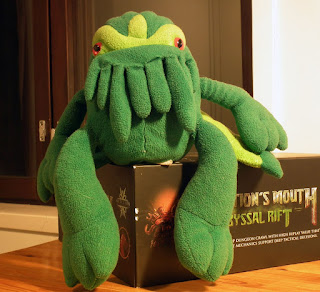 ”Each child should have their own demon for day dreams” my child announced at the age of five. He was going to daycare with his toy Cthulhu. The green, fluffy monster, with tentacles, was his favorite at the time. Yeah, demons can be cute and cuddly too.

I have never liked monsters with tentacles. I learned that when I watched Alien. I like science fiction, action and horror films. Usually I can sleep well after the films, or even during them, but slime and crawling creatures make me feel uncomfortable. One might say that is the point of horror films: to be a bit scared and uncomfortable, from the safety of a couch. 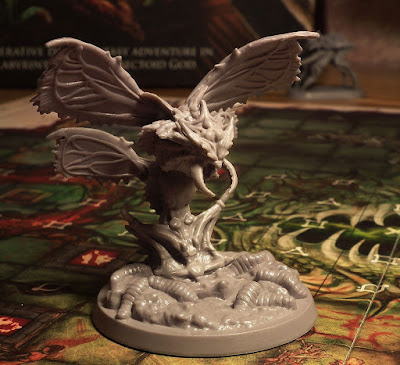 I have to say, that I didn’t think of Perdition’s Mouth as a horror game until I watched Rahdo’s Final Thoughts of the game’s prototype. He loved the game, but said that his wife will not play it due to the horror aspect.

OK, there are monsters. Some of them even have tentacles. The Demon in Perdition’s Mouth: Abyssal Rift is not cuddly. It’s a nasty, spiky formation of evilness from the Abyssal Rift. For me, it reminds me of a butterfly or a moth. And those remind me of the Silence of Lambs. So OK, agreed, it is a bit scary, especially if you imagine it as life-size.

There is violence and torture. In the first Kickstarter campaign we got several comments about the victim miniatures. Especially about the girl in a cage. ”It’s humiliating!” Not the imprisonment, though. But that it was a female. Nobody cared about the male figure strapped up to a spiked wheel. I understand that not everybody likes the victim miniatures. They are cruelty made visible. But hey, this is fiction. Try and watch a documentary about the Syrian war. At least our victims can be rescued. 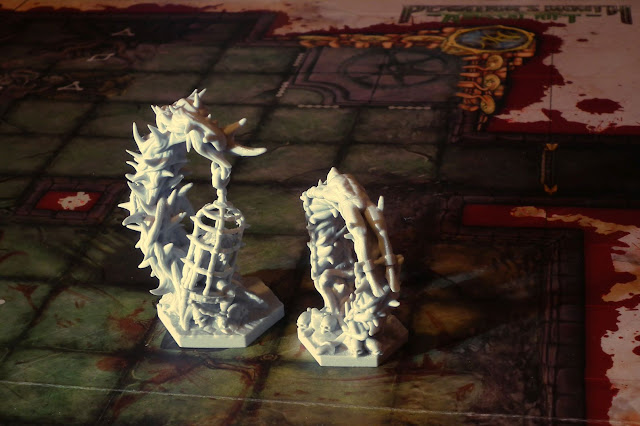 ”Could you remove the blood from the maps?” A sincere question from a backer. I know some people might faint if they see a drop of blood. I don’t like to see blood either. But to have a dungeon with evil monsters, to fight in there for your (make-believe) life and not to have a single drop of blood visible would be… fake.

We have found that the realism in Perdition’s Mouth: Abyssal Rift – not only in graphics, but also in the game mechanisms – is the real horror aspect. My hero does not get better, just the opposite! They’re wounded, they’re slower, they have fewer action points. At the same time, the monsters get worse, bigger, nastier. Not fair, you think? Well, as Rahdo said in his video: this is not high fantasy, it’s fantasy horror. You might survive this dungeon, but you will be bleeding.
During one game session we accidentally spilled some port wine on the game map. Luckily the map is good, thick quality. No real harm done. There are still some red stains though. They blend in with the graphics. You can’t really tell what is blood and what is port.