One taxi driver after another shakes their head as I approach their cars at the Düsseldorf airport. Finally, Mr. Shabani has a car big enough for my luggage. ”Do you know the way and the right entrance?” he asks, when I tell him I want to go to Messe-Essen. This is the second time I’m participating in the world’s biggest gaming convention Essen Spiel. Of course I know the way. You never forget your first time in Essen.

In the past it has usually it has been Timo who traveled to gaming conventions. But right now he has his right hand and thumb in a tight plaster packet after surgery. Nevertheless, he can move nine fingers and uses those to comment on and update our ongoing Kickstarter campaign of Perdition’s Mouth: Abyssal Rift Revised Edition. We got the amount needed for funding within 21 hours. The campaign still requires constant work though: answering questions and organizing marketing to get more pledges. 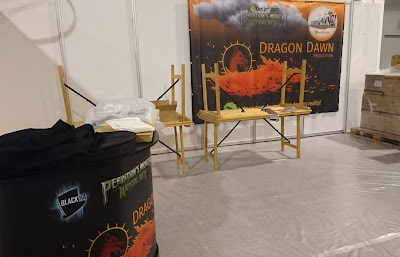 I dragged my 50 kilos of luggage from the taxi to hall number 2 and immediately found friends. Jouni and Tomi from Dized were struggling with IKEA furniture. I smiled. This year I would not spend hours looking for missing screws and struggling with heavy shelves. My luggage included our new sales desk. This very handy Desk&Case solution will be very useful on next year’s tour. In only five minutes the desk was set and, with the company’s new logo emblazoned on it, it looked great.

Essen Spiel is a truly international event. It gathers game publishers, manufacturers and retailers from all over the world. Boardgamegeeks travel long distances and queue hours to get the game they desire. It was very useful that we had our foreign team members at the booth. We were able to present our games in English, German, Spanish, French, Czech, Swedish and Finnish. 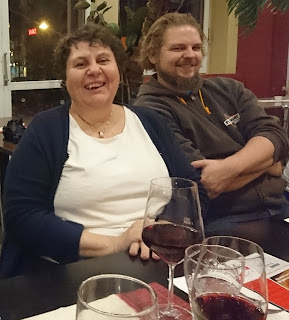 This was the first time I met some of our team members. We have written hundreds of messages on our virtual platform, shared ideas and worked together for a common vision. But have never met. Finally aliases had faces. I learned more of where they come from, saw pictures of their children. I even found out one of them was half Finnish!

How can you tell you have been in Essen?
For us, the Essen week also means pizza with our dear friend Dagmar de Cassan. She has an amazing collection of 30,000 board games in her board game museum. While enjoying our dinner (and the distinctive service traditions of the pizzeria) we discussed the future of the collection. It needs a new location and funding for the maintenance. I truly hope a solution will be found for this soon.

First of all, you have lost your voice due to four days of constant talking in a noisy hall. You have explained the main features and basic rules of your games over and over again. This year we presented, in addition to our existing games Perdition’s Mouth and Black Hat, the prototype of Darwinning! This was the first time we presented it to the public and the feedback we got was excellent. Our team’s brainstorming for the name of the game proved to have been successful. Noble Artist had managed to make a logo that raised an instant interest in the game.

We thought we designed a family game. So I was surprised to see a group of older women stop and playtest Darwinning! The tradition of trick-taking games in Germany and Austria is long. People are used to playing them and want to find new variations on card games. We had many hilarious moments with Darwinning!: amebas eating a dinosaur, an elephant with a hard shell and birds using tools. We will continue developing the game based on the feedback and ideas we got at Essen. In January 2018 you will have an excellent trick-taking game on Kickstarter!

Time spent in Essen can also be counted by the dirty t-shirts with a company logo. I usually have one t-shirt for each fair day. This year some of them came home unused. Our order of new t-shirts for the whole team became a sad example of deliveries gone wrong. After two weeks in ”out-for-delivery” -mode, DPD finally managed to deliver the package to my hotel during the second day of the fair. Yet again, this reminded us why we should not use DPD, as this has happened with over half of their shipments to us. Perhaps I should feel lucky: every year there are companies in the fair whose games are stuck in customs or just not delivered.

Also your bag is filled with free samples from Chinese manufacturers, who have eagerly explained their factory sizes and showed miniatures, punch boards and dice with a big smile. They all have better quality than the competitors and they have all produced the best games ever published. It’s not easy to find a trustworthy manufacturer. My most important meeting during Essen was with our current manufacturer – LongPack Games. We had a long list of minor details for the ongoing production of Perdition’s Mouth: Abyssal Rift – Traitor Guard and for future productions. We looked up card samples, talked about packing and shipping, ideas for inserts etc. Small things, but important for our integrity.

Every year during Essen Spiel the winter begins, in Finland. Temperatures went below -20°C and we had 10cm of snow. The Iranian taxidriver in Düsseldorf had relatives in Sweden. He knew it is a cold country, and that Finland is even colder. Dark and cold. I have to disagree. With the river frozen and snow all around, it’s like millions of diamonds shimmering.

At home, I find out that a toner bottle has leaked in the suitcase. Luckily not on Timo’s new board game, nor on the special Pikachu I bought for Väinö.