by Pascal Filipovicz October 16, 2017
Blog, News
I drove the caravan, almost 16 meters in total length when hitched up, from our yard down a narrow forest road to the E4. It was surprisingly easy – and getting easier: the next turn would be after 120 kilometers. So let’s go, to southern Finland! We were, however, 45 mins behind the planned schedule – and were soon to find out that that was the least of our problems.
Print proofs of the Traitor Guard expansion were supposed to be delivered the day before. We were going to be on the road for the next five days. Production could not wait that long, we needed the print proofs. While I was driving, my husband Timo phoned DHL trying to locate the delivery. If it was still in Rovaniemi, we could catch it there. We needed to stop there for some hours, anyway.
Unfortunately, the package was already in a delivery truck. After a couple of hours I got a phone call from the delivery truck driver. He was heading back to Rovaniemi. Just in time for us to pick up the package and be on the road again. Right on schedule!

During our stop in Rovaniemi we changed the car. Our largest ”family member”, a Chevrolet Suburban called ”Lump” (Möhkö), was left to rest and we continued with a Jeep Grand Cherokee. We have had this Jeep for some months. We had never used it and were going to change it to a Volkswagen Transporter T5 in southern Finland.
Our son Väinö didn’t like the Jeep, because ”it’s so small”. He even posted a picture of the ”tiny spot” he was having at the back seat to his friends on WhatsApp. Small boy and already fond of big vehicles. ”I like the Möhkö more”, he announced. Yeah, after this journey, I would like the Lump more, too.
The journey ended 240 kilometers later, all of a sudden, right after a roundabout. It was raining, the pitch black darkness of late evening, and we were partly blocking the road and the Jeep would not start…

Rescued by pros and neighbour

Some minutes of trying and testing achieved nothing. So when a van with Limingan Raskashuolto (Liminka Heavy repair) text on the van back stopped to help, it was a real relief. We were soon towed to their garage yard just a kilometer further on. It was an experience to be towed having a caravan behind you. The helpful guy gave us electricity to the caravan and organized their tow car to pick up the Jeep. It could be fixed in their repair workshop in Oulu.

So we had our first caravan dinner at a garage back yard. Heavy trucks and other cars that worked passing by. But our little home was warm and cozy. Väinö soon went to bed, after all it was late. Timo and I checked the print proofs while waiting for the tow car. Fortunately the quality of the printing was much better than the quality of our car. 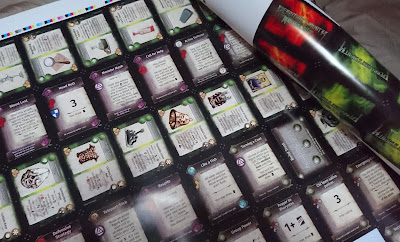 The next day we learned which part of the car was broken, how many days it would take to get it and how many numbers the price tag had. None of them sounded good. Our wide network amongst US car repair guys turned out to be really useful. We managed to get the needed part in five hours and with a more reasonable price.
Nevertheless, in the evening the car still would not start. It was clear we would not get to southern Finland. So it was time for survival plan b+n: I would go back to Rovaniemi, fetch Lump and drive back to get the guys and our caravan back home. Even if the situation was tricky the solution was easy. Our friend, who lives in Oulu and has a cottage right next to our home, was going to his cottage the very next day. I got a ride to Rovaniemi. Before midday I was already driving back with good ol’ Lump.

On our way back we stopped in a caravan shop to check the latest models and to get some ideas for improvements. It is clear that the vast majority of caravans are not designed for long-term living. They are meant for short vacations. Design concentrates on luxury items like wine glass holders and impressive LED lighting instead of usefulness. Our son voted as ”most stupid layout” a solution where a single bed was located on top of the double bed. Perhaps caravan designers never have to pee during the night.
I drove from Rovaniemi to home. It was dark and raining. If there were reindeer, it would have been almost impossible to see them. So I used my Reindeer bell app. This quite recent app has managed to reduce car crashes significantly with reindeer in northern Finland. I highly recommend this to everyone driving on arctic roads. It’s free to download. Reindeer bell gives a warning signal when you are close to an area where reindeer have been seen recently.

We didn’t get any reindeer alarms. Late in the evening we were safely at home again. But we still had the last junction. A 90 degree turn from the narrow forest road next to our garage through a less than 3 meter ”wide” gap.

In the darkness neither me, behind the wheel, nor the guys with flashlights, outside, could see much. I drove really slowly, got instructions, but still suddenly found the caravan very close to a pine tree. Way too close… 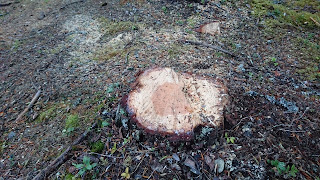 The final problem was solved with a chainsaw. Luckily we live in an area where cutting down our own trees is allowed. Nevertheless it is not recommended to do it in the middle of the night. With one pine less to worry about I finally managed to park the caravan.
So our little test journey with the caravan turned out to be something really different than what we planned. Changing the Jeep is delayed for some weeks, solar panels will be installed later. I need to find some compensation for my nephew who missed his cousin’s visit.

In Finland we have a saying: A shitty journey but at least it got made (from the Unknown Soldier by Väinö Linna). Anyhow, I feel this was a very successful rehearsal. We learned (again) that life does not always go as planned.

The year 2018 won’t be any different: we will experience surprises.
But at least it’s now proven that our family is good at solving problems.
For more, please follow this link: https://ddptour.blogspot.fr
Share
185 / 306